Finding A Good Shop To Get Your Maintenance Done Is Important 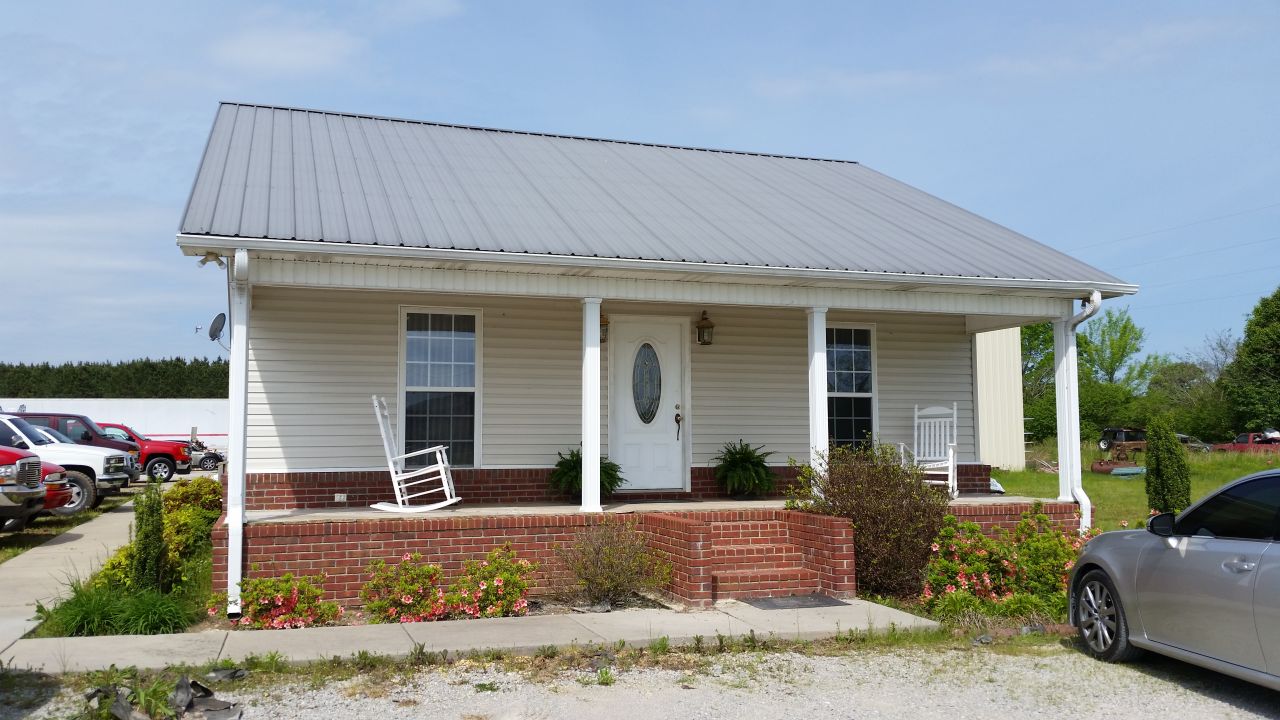 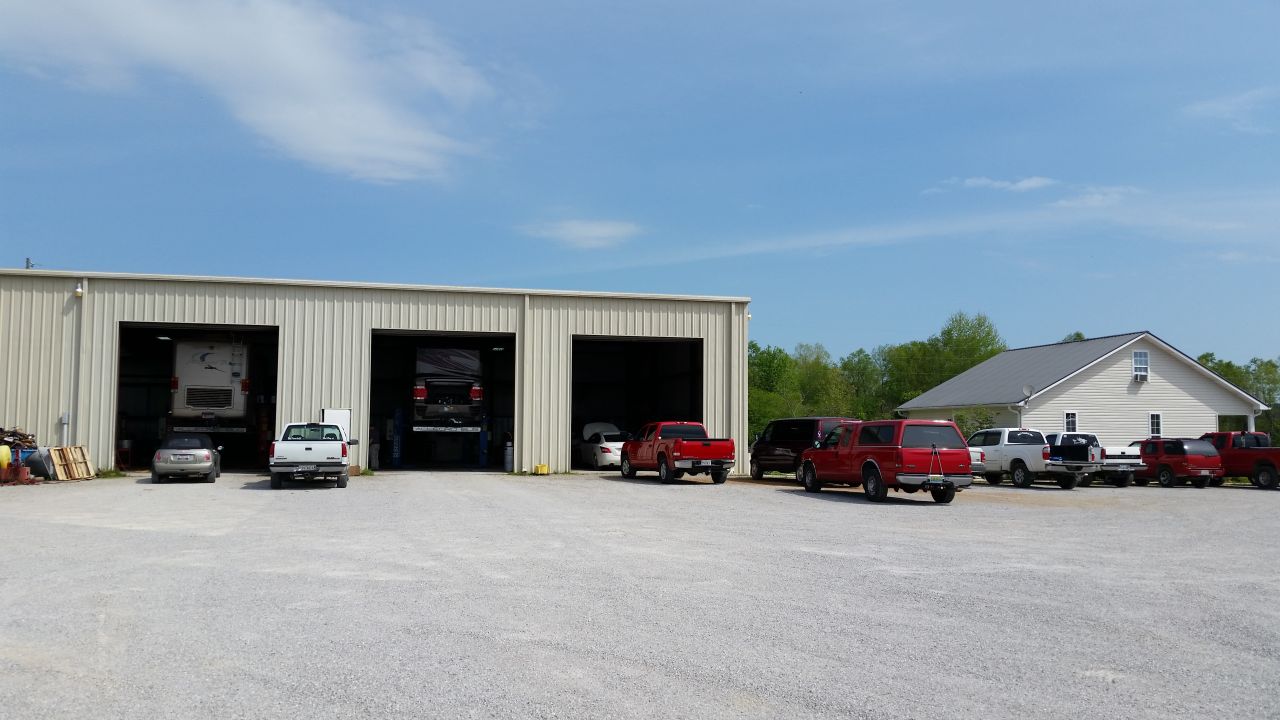 We all gotta do it. It’s the yearly maintenance and check-up of our motor homes. The oil changes and filter changes. The top to bottom inspections.

Not something we all enjoy but it’s what keeps these beauties on the road and purring.

For the first time we find ourselves with a coach without a Freightliner chassis. We would always take our Tour Master (on the Freightliner chassis) to the service center in Gaffney, SC. We loved those guys and trusted them. However, with our new motor home being on the Tiffin Power Glide chassis, we were not sure where we would take it for service. We found out that we worried for nothing. Asking our fellow RVers where they took their homes on wheels, one place kept coming up over and over again. Bay Diesel and A/C, Inc in Red Bay, Alabama, just around the corner from the Tiffin Service Center and Campground.

What a great find and convenient too!

We had an appointment for 11:30am on a Wednesday to get a yearly check-up and oil change on our engine and generator. This place came highly recommended by everyone that we talked to. With our service work done at Tiffin and nowhere else to go, we headed to Bay Diesel early. Being right around the corner from the Tiffin Service Campground it took us no time to get there. Traffic was not an issue. Then again, this is Red Bay. I highly doubt traffic is ever an issue. Not to mention it’s just over a mile from the campground.

We got there at 9am hoping that if they had time, we could get in early as we were itching to get back on the road. 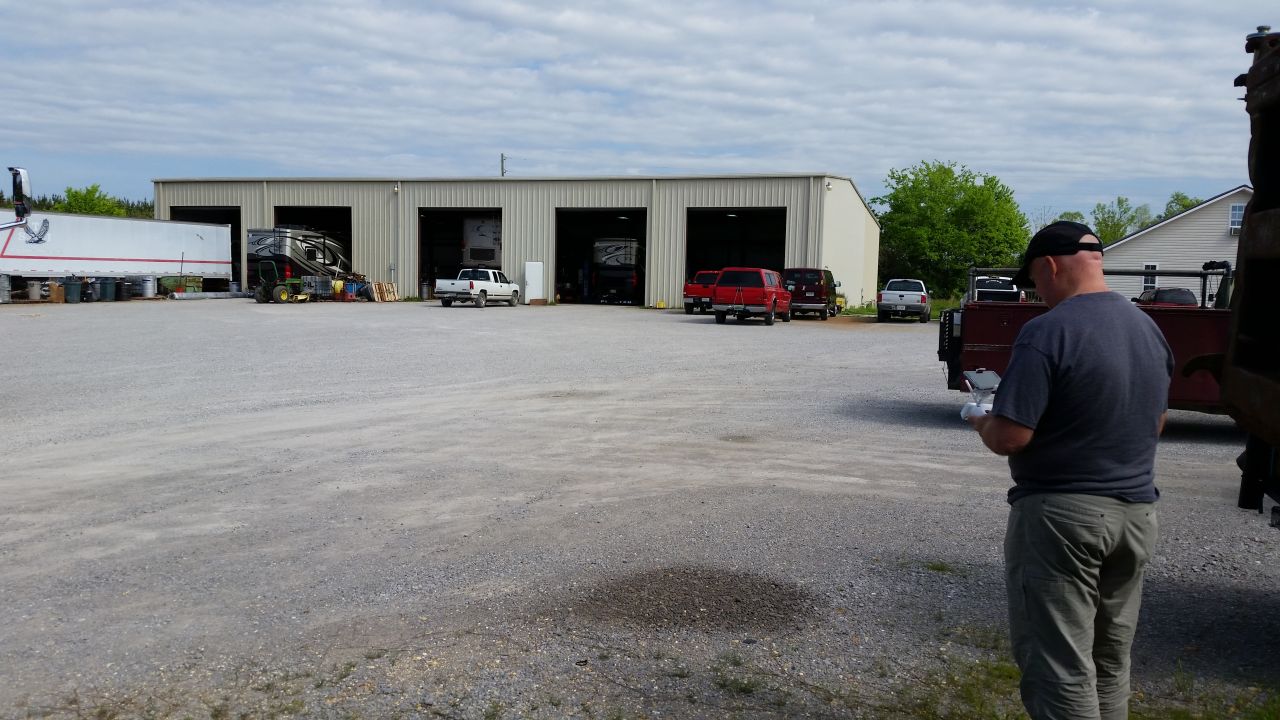 So what does one do while waiting for your appointment? Well…if you’re David, you get out your UAV and fly the area of course. He got some great overhead shots of the shop. No video, just pictures this time. 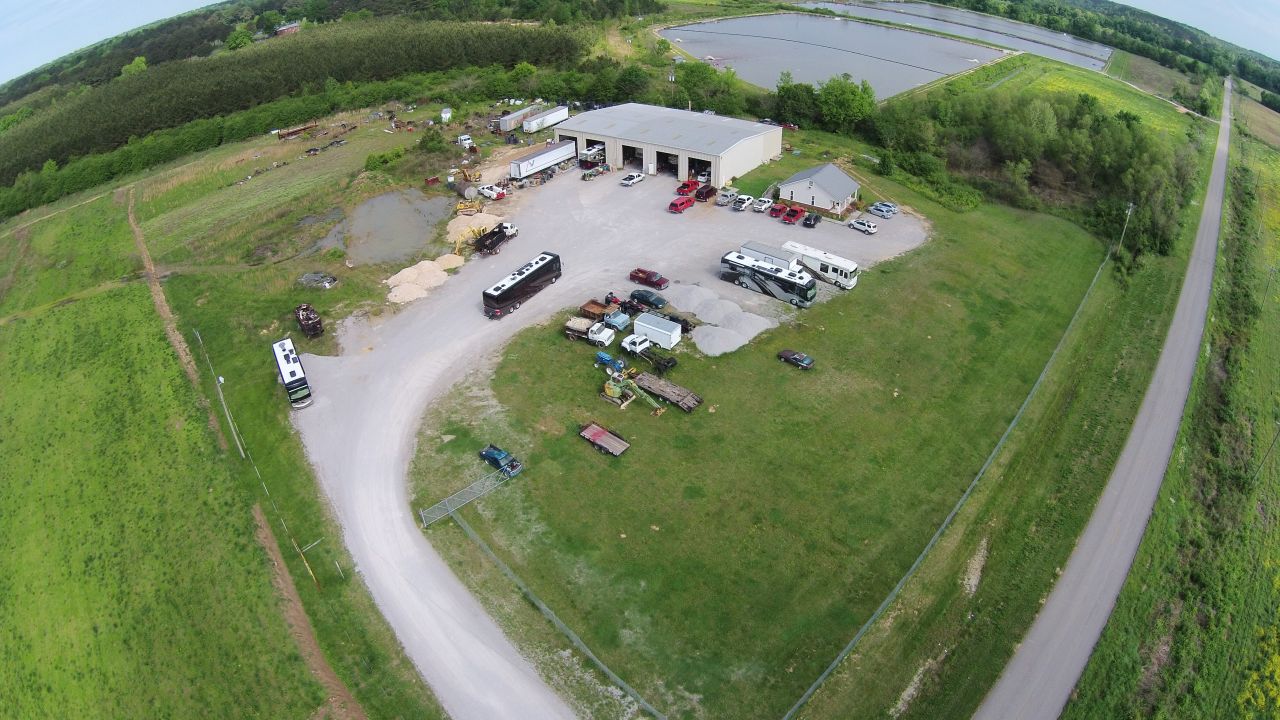 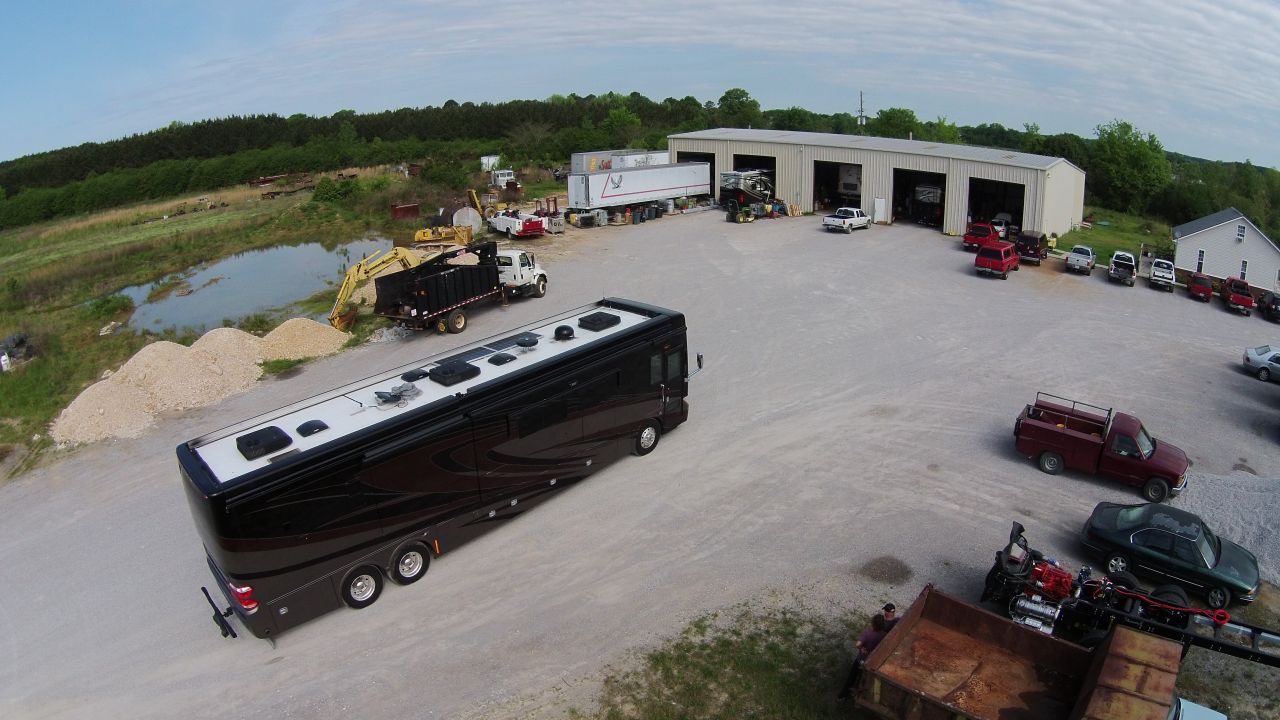 Our Coach Waiting For Service At Bay Diesel

We gave the owner the pictures for a future website that he may or may not be doing at some point. Yes, this day and age you would think that every business had a website. Sorry to say that the owner, Chris, does not have a website for Bay Diesel. Really though, the word of mouth from other RVers keeps him busy from sun up to sun down, along with other diesel trucks in the area.

So let me tell you something about this place that really made our day. When we were in the office talking to Chris (who is an avid RC pilot himself) and his wife, who are very nice people by the way, a tech came in with a small jar of antifreeze that he had just drained from a coach he was working on. The owner of the coach wanted his antifreeze changed as he thought it needed it. After looking at the sample that the tech came in with, Chris and the tech both agreed that the antifreeze was fine and that it did not need replacing.

We were impressed to say the least. Some places, I hesitate to say “most” as I am an optimist, would just change the antifreeze and therefore charge the customer for it. After all, he asked for it to be changed, right? Not here. They are truly honest people that are not out to make a quick buck. They want to make sure you are happy and that your unit is in tip-top shape when it leaves them. Not only that but you are allowed to be in the bay while your coach is being worked on and ask all the questions you want. They want to make sure you understand what they are doing and what needs to be done, and more importantly, what does not need to be done or can wait until next year.

Coming in early and sitting in the parking lot waiting paid off in the long run. They took us in a whole hour and a half early and got us out just over an hour later, before our originally scheduled time I might add. 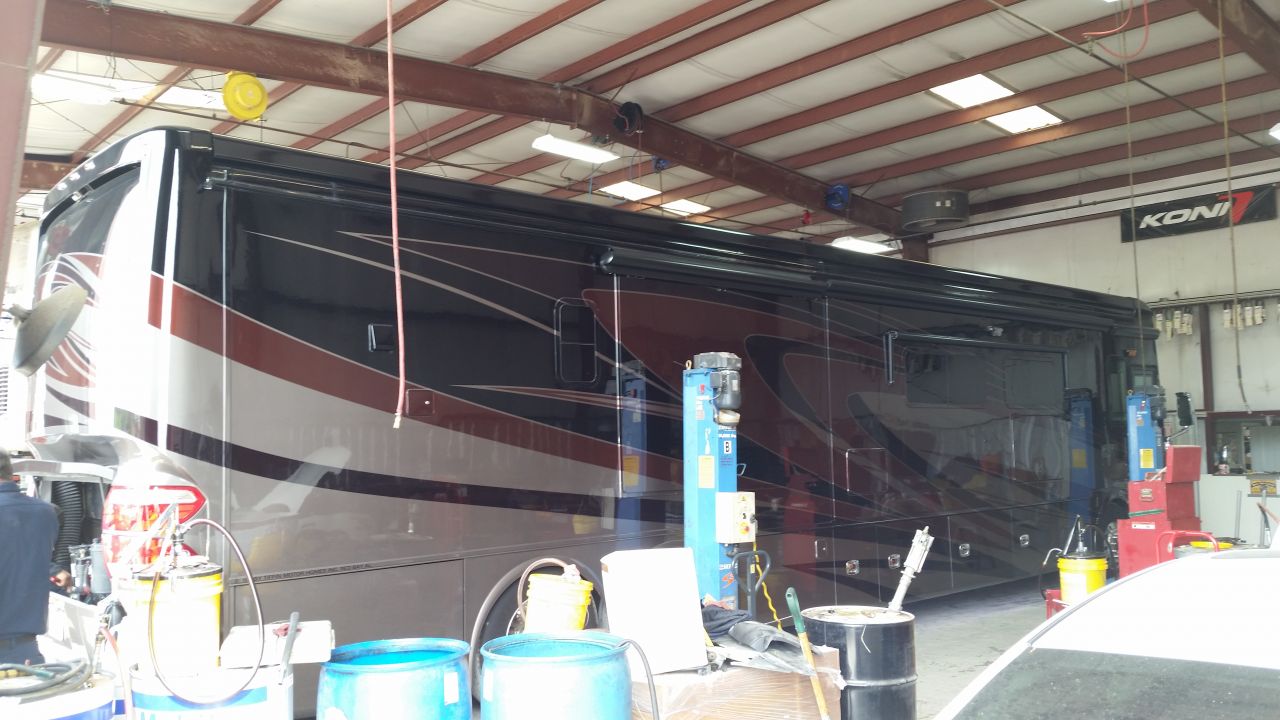 Our Coach In Bay Diesel

I know I’ve said this before, but I’m going to say it again. The hydraulic lifts that they use to get these massive beasts into the air with ease still amazes me. Although, David felt the need to step in there and help out. Be it any way he can. Not really sure how much of a “help” this was though.

David Had To Help Lift The Coach 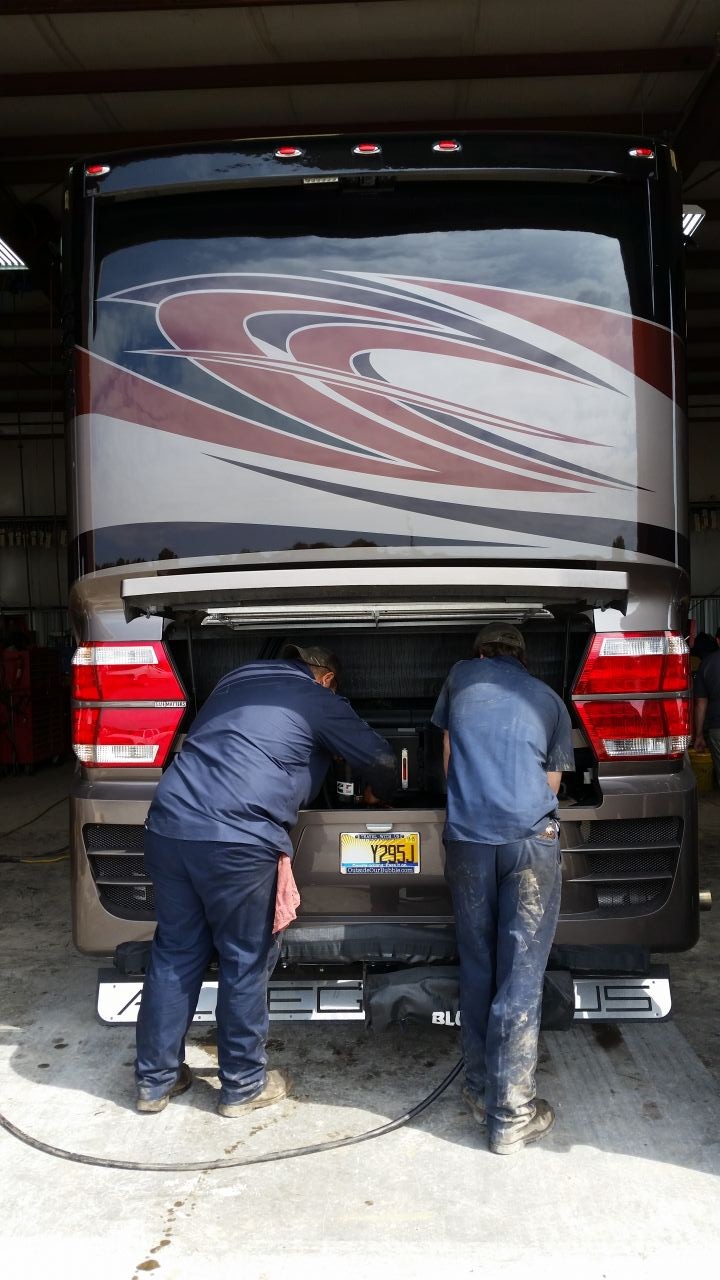 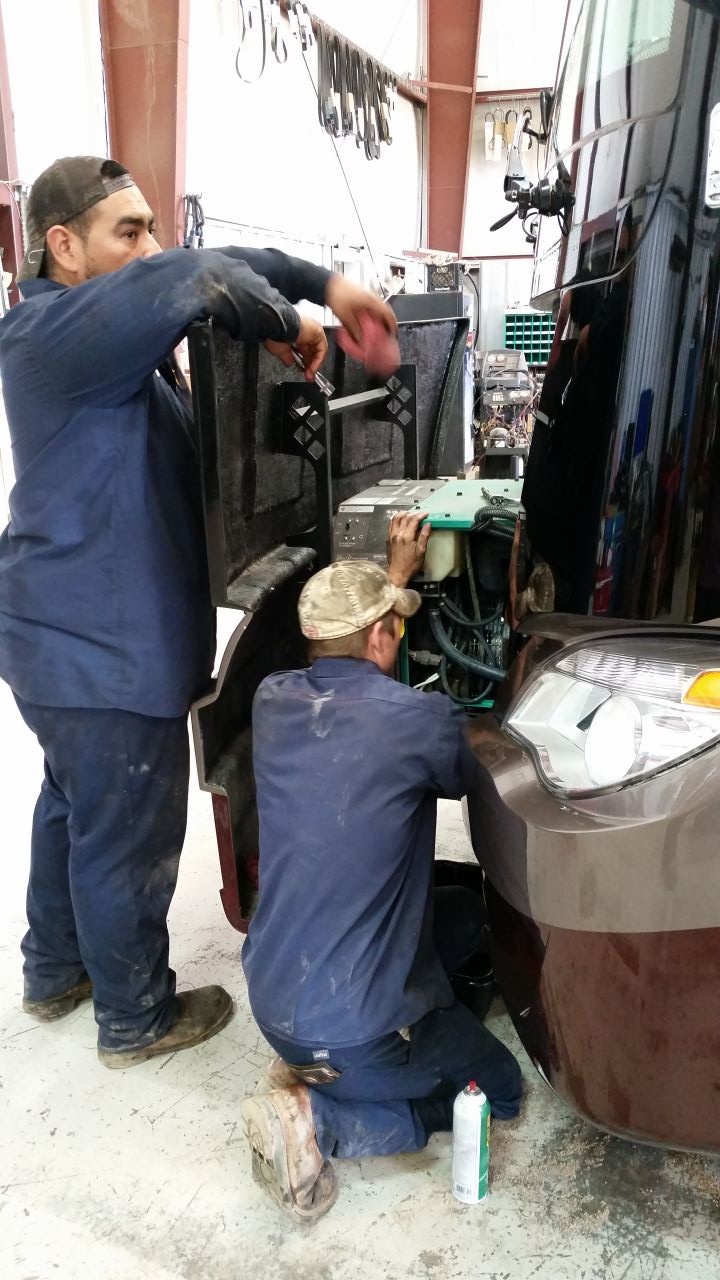 Not only was it time for the engine to get it’s oil changed and filters checked/changed but the generator needed it also. Even if you do not use your generator on a regular basis, it’s a good idea to have it serviced at least once a year. In our opinion that is. Being out west really did a number on our air filters.

Thanks to the hard working guys at Bay Diesel we were able to get on the road and make our way back north (although I’m not sure why as it was snowing when we got there) in a few days.

With Bay Diesel’s integrity and pride, we will definitely take our motor home there for all of its service needs. We felt very comfortable there and very confidant that the job was done right and at a fair price.

Why are you guys up so early?! And why do I have t

Rainy and icky today so I'm going to remember the

Really mom?! Not another picture 🙄 #outsideourb

I got to go with mom to pick up the groceries! Tha

Working with dad is fun! I stay right by his side.