Tire Pressure Monitoring System (TPMS) And Why You Want One! 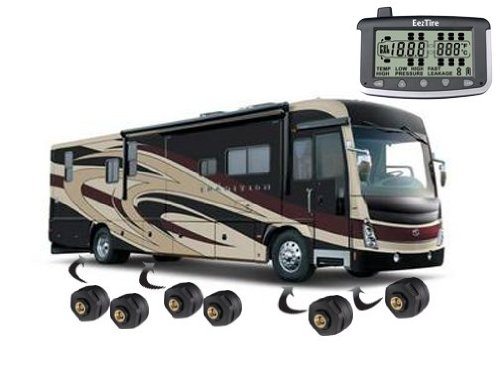 This is our plea to RV’ers and as such, a Public Service Announcement! So please, please be so kind to share this post with others.

As the title says…”Why You Want One”. And yes, YOU WANT ONE if you currently do not have one. A Tire Pressure Monitoring System, TMPS as they are referred to, are just that, a sensor driven system that monitors and reports on the current pressure of your tires on not only your motor coach, but also the car, suv, trailer, or whatever you may be towing.

Let me put it to you this way, a 32,000 lbs coach or even larger, pulling a 4,600 lbs SUV and the SUV blows a rear tire…will you know it? Really, will you? Nope, you will more than likely never feel it as the mass of the coach and the shear power of it would mask any resistance you would feel. But besides that, I really would want to know if I was loosing air due to a nail or something while driving or even before I pulled out. And thus the Tire Pressure Monitor System comes into play.

Each tire is fitted with a little sensor that replaces your air valve stem cap. It will take a reading of your tire pressure and even the heat it can read through the valve stem. All systems I have tried allow you to set a high and low pressure point as well as heat level at which to sound the alert. However, heat is really not used as a high alarm and is usually left a high default value. But continue reading as to WHY you want to monitor it.

The better systems also monitor for slow leaks. Now this is important as some systems will only alert once the pressure gets below your set limit. I however want to know if I am loosing X amount of air over a given period of time thus BEFORE it gets down to my low set point. Why? Well as you drive, your tires heat up and pressure increases in the tire. The hotter, the more pressure. It is not unusual to see a tire pressure climb 15 PSI or more based on the temperature. So, say that I run my front tires at 115 PSI, and my low point is set for 105 PSI. When driving, my tires may go up to 125 PSI. If I pick up a nail and start to leak, I want to know it before it gets to my low set alert point which would be already a 20 PSI loss. So a good TPMS also monitors the CURRENT tire pressure and thus will alert me if I loose X amount of pressure over X amount of time based on the last high pressure reading.

You may be asking why I would set my low point at 105 PSI then and not like 112 or something closer to what I set my pressure at. Well, that is because the reverse happens when a tire is cooled as the pressure will lower. If I have it set to close, then even overnight when the outside temp drops, so does the tire pressure and my system will wake me up if left on.

A TPMS is also not just for driving, it is also for starting out. Let’s face it, most of us do not go out and “thump” our tires to check them. As such, when your system is on, even when parked, it will alert you if your tire pressure drops from that nail you picked up coming into the park. After all, you may be able to see a front tire being low, but you will not be able to see the duel tires on the back as being low as one tire will keep the other lifted. As such, you could roll out never knowing you already have an issue and you are then just going on borrowed time as one tire is not meant to carry that weight. At the same time the low tire will also be building heat. For as the more it contacts the ground due to the low pressure, the more heat it builds. You can guess what may soon happen based on one of these tires.

As far as to what you may be towing…MONITOR THOSE TIRES ALSO. As mentioned, if you blow a tire in whatever you are towing, you more than likely will not know it until some nice person pulls up to you and gets your attention. Nope, they are not trying to be nice waving at you as they go by…they are trying to tell you that you are dragging what you are towing. You might not even be able to tell in the rear cam until you start to see the sparks from being down to the rim. These rigs we drive are so large and have so much mass and torque in the engine, that car you are pulling with the flat means nothing too it. (However that car will surely push you when trying to stop if you do not have a supplemental braking system, but that is for another chat.) You don’t believe you would not know it? Check out this video that I am picking up at 3:54 into it, and remember, you are seeing a smaller RV that is much much older and thus even less power than todays coaches and the guy never knew it. He was being followed for 6 miles… CLICK HERE.

So remember above I mentioned to read on…well…the TMPS system worked so well on our first trip with it as I was actually able to see that my front driver side tire of my Saturn Outlook was running hot as the temperature reading was much higher than the other tires. (I check them from time to time looking at the readings.) When I stopped I used my IR Heat Gun Reader and took a reading to be sure it was not the sensor sending bad data. Sure enough, the tire was 14 degrees hotter than the other tires. I looked at the brakes and sure enough, they were thinner than the others and more brake dust was on the rim. This is a sign that the caliper was not releasing all the way after the brakes were applied. So I took it in for service and the TPMS may have just saved us from a future braking issue. Note, even though it was not OVER HOT to make an alarm sound on the monitor, the system did allow me to “see” an issue that the brakes were making based on the increased temperature reading. 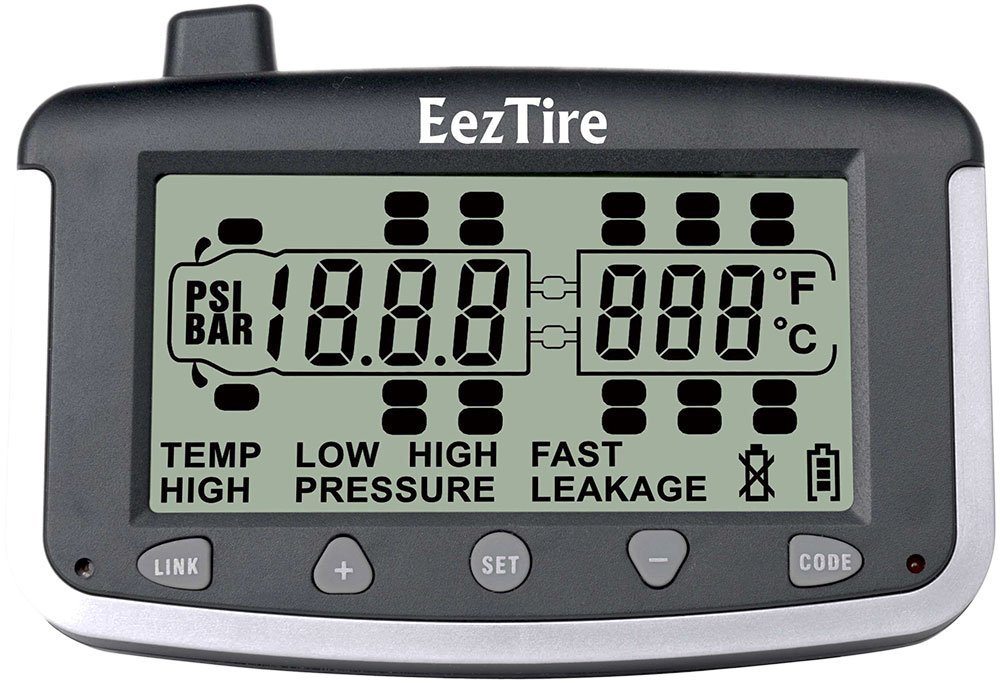 We use the EezTire and it does the readings nicely as it scrolls through tire by tire changing every 5 seconds giving you pressure and temp readings. It has a large display and tells you things in English vs little icons. It also has a red flashing light and a loud alert when something takes place. Side note…I also tried the TireTraker/Hawkshead and it failed to deliver continued proper results for us. At that time, I was replacing a much older PressurePro as it lacked features such as rapid air loss and live display. Many people have the unit and it works great for them, just did not for us after having two monitors replaced. When it worked, it worked.‎ 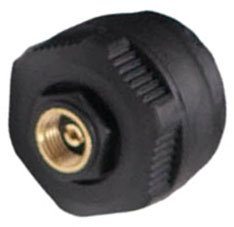 Oh, about the tire sensors, no worries on weight or anything as they are very small and will not have any affect on balance or valve stems. We have put 130K miles on our Saturn between driving and towing it and it is a non issue. I take off the theft protection caps as I do not find a need for them as I have never heard of someone stealing one. I also then do not need to fight to get it off by needing to use a special tool. I also did not see any need for the larger “flow through” sensors as I still need to remove the value cap anyway, so why not just remove the sensor?  As far as battery life of the sensors…I get about 1.5 years on them and they are very cheap to buy.  CR 1632 Batteries…25 pack for under $10.

One last thing…You will want to use a booster especially in larger coaches. This goes for any TPMS system as you do not want to miss your sensor signals.

So no matter what product you may buy….PLEASE JUST BUY ONE if you do not have one. It will make you much safer on the road. In fact, here, let me Google that for you so you can find a TPMS that fits your needs (Also see update below.) —–> CLICK HERE

I also did a short video talk about this topic… Again, please be so kind to share it.

Side note…I also made a video long ago doing an open box of the EezTire and simple install info. It is on their website and you can find it here on our YouTube Channel.

UPDATE: Seeing I usually get asked if I will help program a TPMS if someone would buy one after I tell them about why they should have one, I got proactive. So to get you going quickly I contacted EEZ RV Products, maker of the EezTire TPMS system, and got them to offer FREE PROGRAMMING with FREE SHIPPING. You need to purchase directly from their site. Be sure to add the programming package into the shopping cart and use coupon code Bubble at check out and also choose USPS Priority Mail and use code Freeship for the free shipping.

Any other TPMS company that cares to offer the same, please reach out to us and I will add you above. The idea is to just get them on RV’s with no fuss.

(We make NO INCOME from this nor are asking for any.)

Throwback pic..... Just hanging out on the trailer

Throwback pic....dad's teaching me how to drive! #

Dad did it! It's all over now! So proud of him. Ca

Throwback pic.....Dad is trying to teach me "hands

Throwback pic.... just a lazy day in the sun. We s