Well, We Did It…We’re On The Road Again! 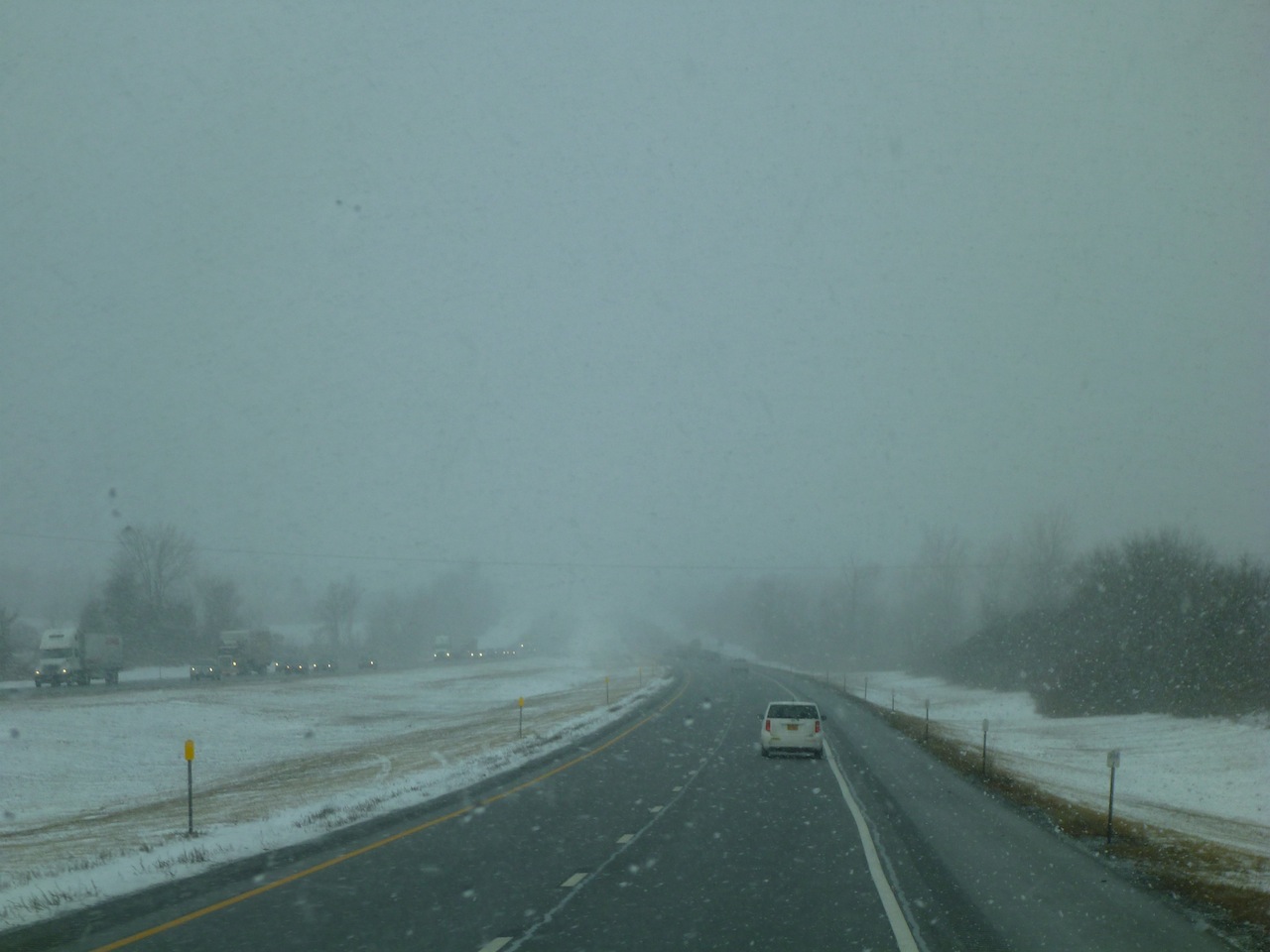 Well…We did it! We got out of dodge. Or in this case, Rochester, NY. And none to soon if I do say so. We left Wednesday and today, Friday, there is a huge snow storm hitting our area. Good timing on our part.

When we left our home the roads were clear, the sky was clear and the coach was warm. Within 20 minutes we hit snow and blowing wind. Makes for a lovely time driving.

Ice Hanging Off Of The Side Of The Falling Rock Areas Next To The Highway.

How cold was it? Well, you know those “falling rock” areas of the highways where they have blasted out the road and therefore there are rock walls next to the road? Well, this is what we saw. Icicles hanging off the rock walls. Sorry the picture is a little blurry but that’s what you get for trying to take a quick picture at 60 MPH.

Of course, like usual, once we got past Buffalo the weather cleared right up. 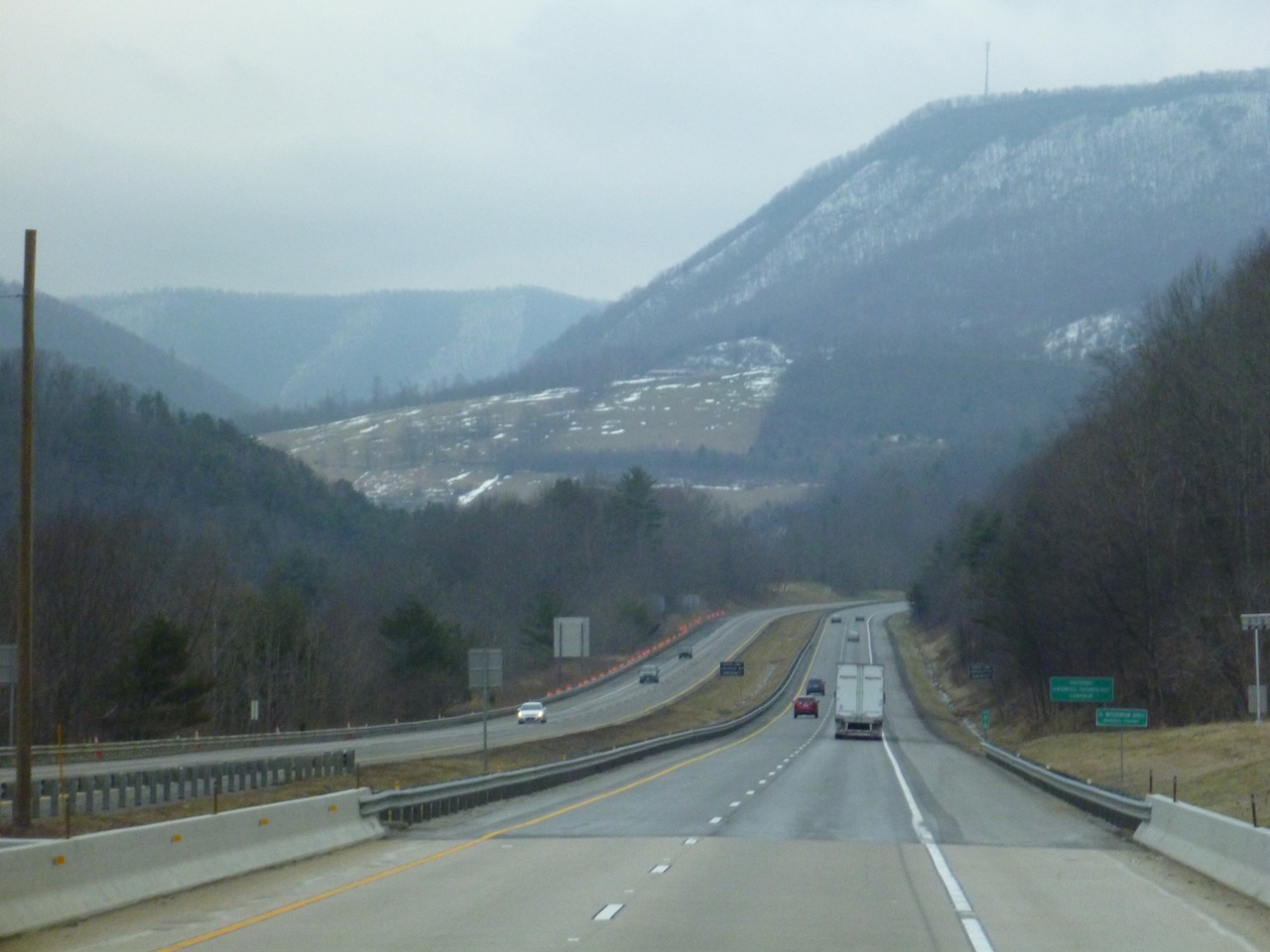 Driving South Through The Hills Of West Virginia

When we hit West Virginia you can see the snow has pretty much disappeared.

You know, we’ve driven this route many times and this is the first time, I do believe, that I read the sign for this bridge that we crossed. 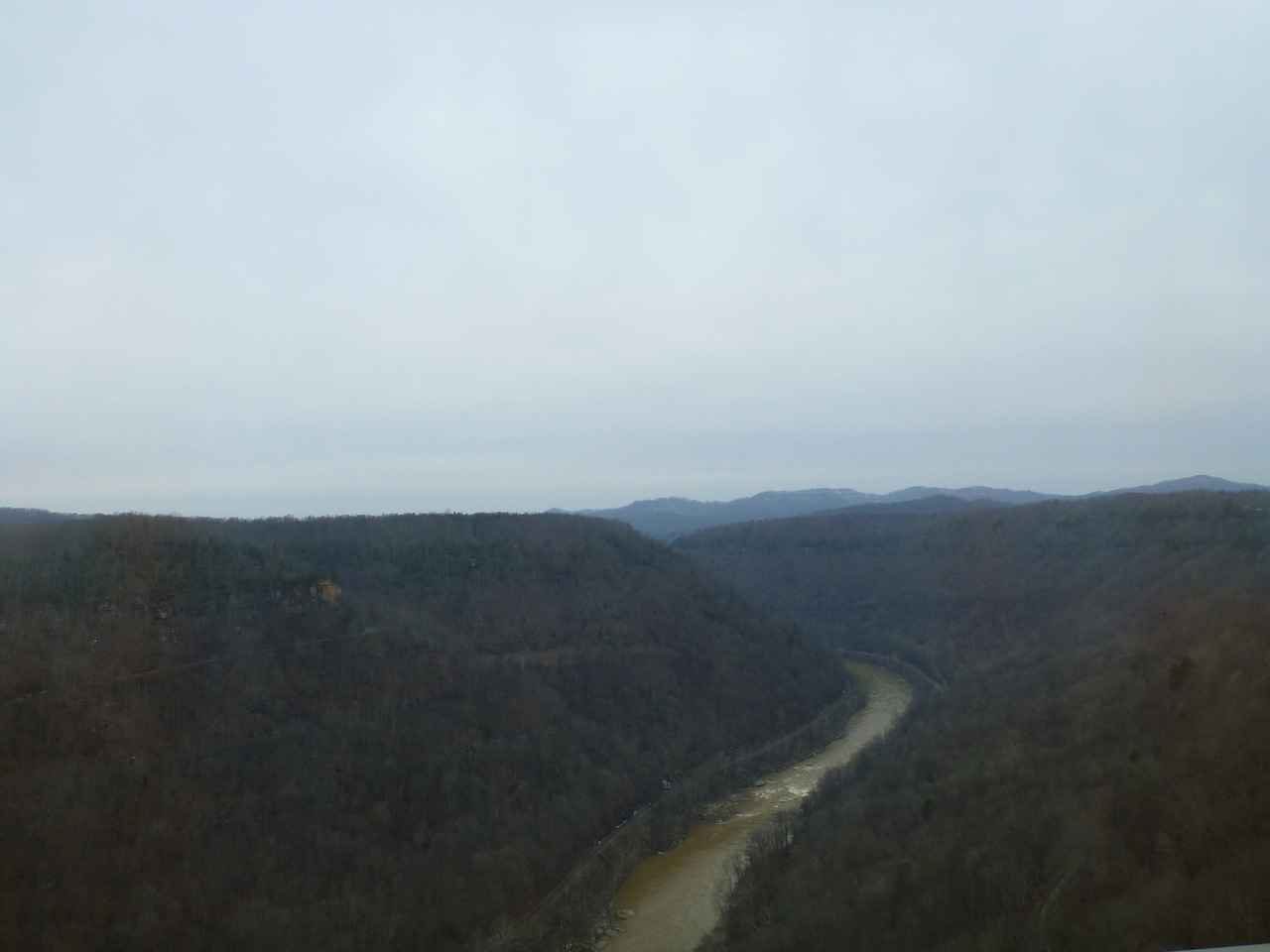 The View From The Longest Arch Bridge In The Western Hemisphere.

This is the New River Gorge Bridge in West Virginia.  It’s the longest steal spanning arch bridge in the western hemisphere and the second highest in the United States.  This picture above is the view you have when you pass over it.  Beautiful, but can you imagine the view in the fall when the leaves are changing colors.  I bet that’s a site.

The bridge itself spans 3030 feet long, is 876 feet high and 70 feet wide. It consists of 88 million pounds of US Cor Ten steel and American cement. Opened and dedicated in 1977, it has become the symbol of West Virgina.

At a cost of almost 37 million dollars, they did save $300,000 dollars off the original cost by using unpainted weathering steel. This also saves the DOT roughly 1 million dollars every time the bridge would have needed to be repainted. Yeah for saving money. When does that ever happen in government? Smart thinking back then. I bet the painters up on the Golden Gate Bridge wish their bosses thought of that one.

Once a year West Virginia actually stops traffic on the bridge and they celebrate “Bridge Day“. People from all over the world come here to legally BASE jump off the bridge among other things. Over 80,000 people are expected to attend this event. Most are spectators, but some are crazy enough to jump. Maybe someday…in the future…way waaaay in the future. Then again…maybe not. You can rappel off of it too! That might just have to go into the memory bank for a possible future adventure.

So…what does a black motorcoach look like after miles and miles of snow and salted roads? Not pretty. 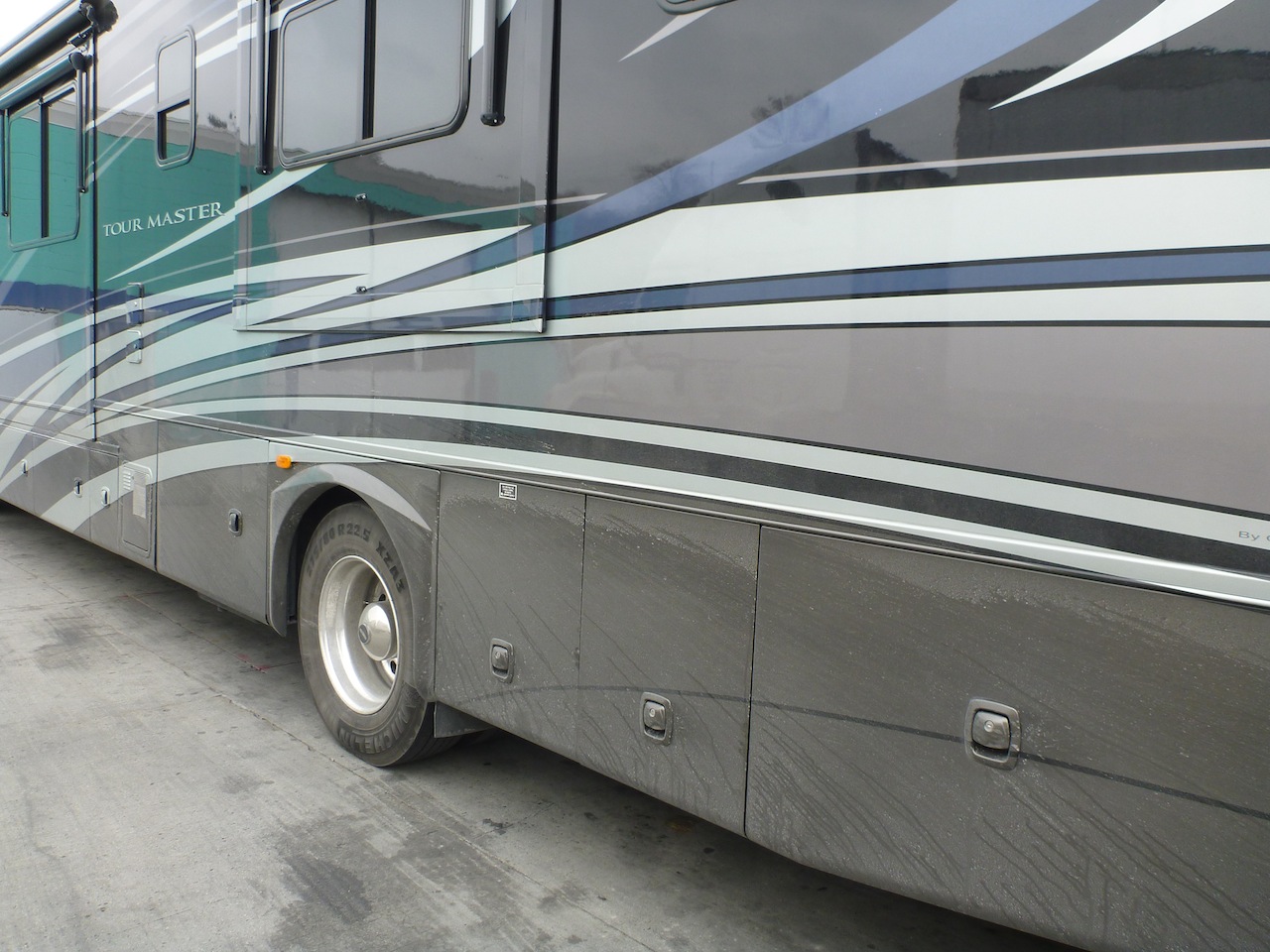 Waiting In Line At A Truck Wash 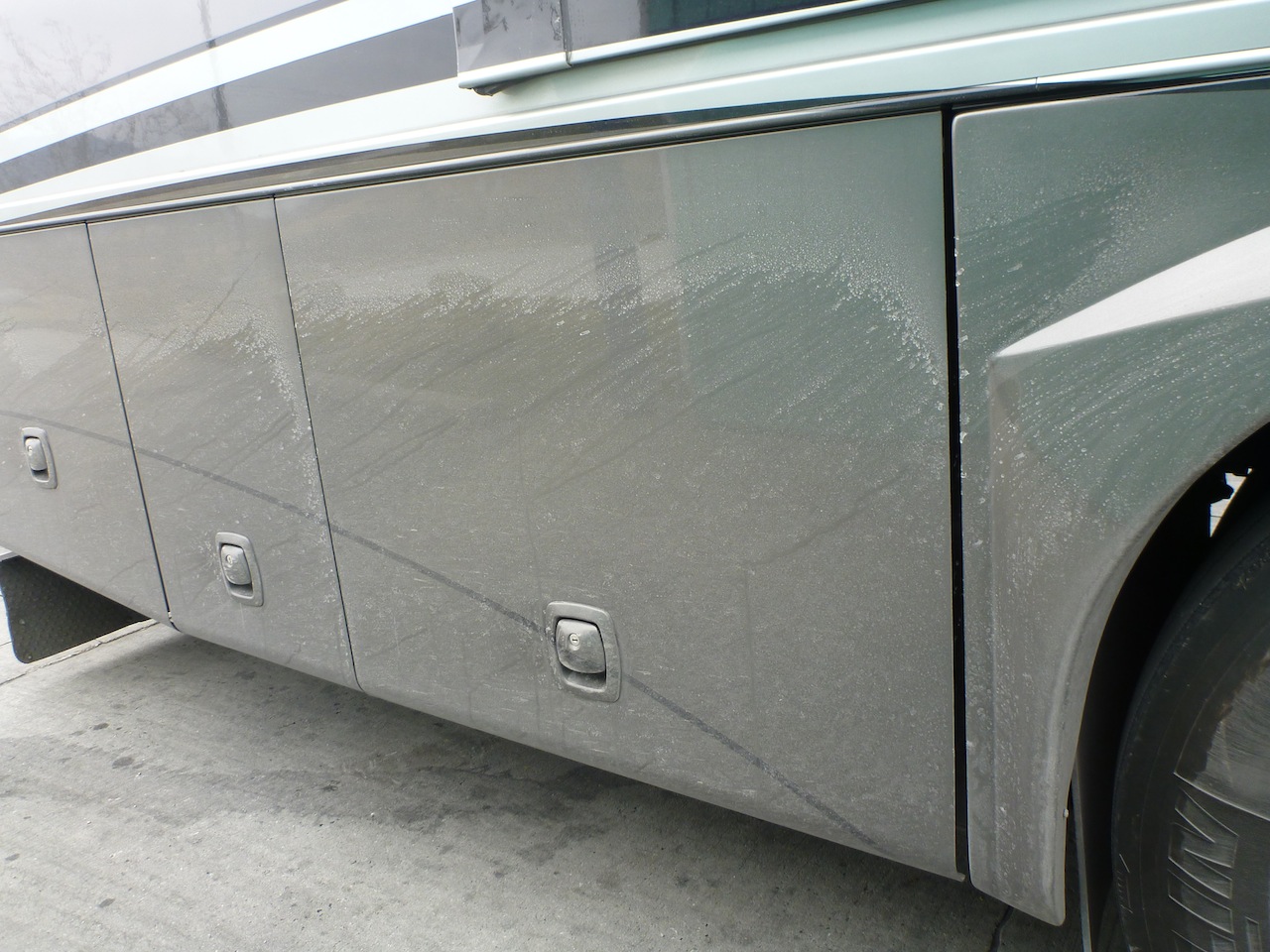 Waiting In Line At A Truck Wash. Our Black Motorcoach Is Diiirrrttyyy!

The car didn’t fare any better. 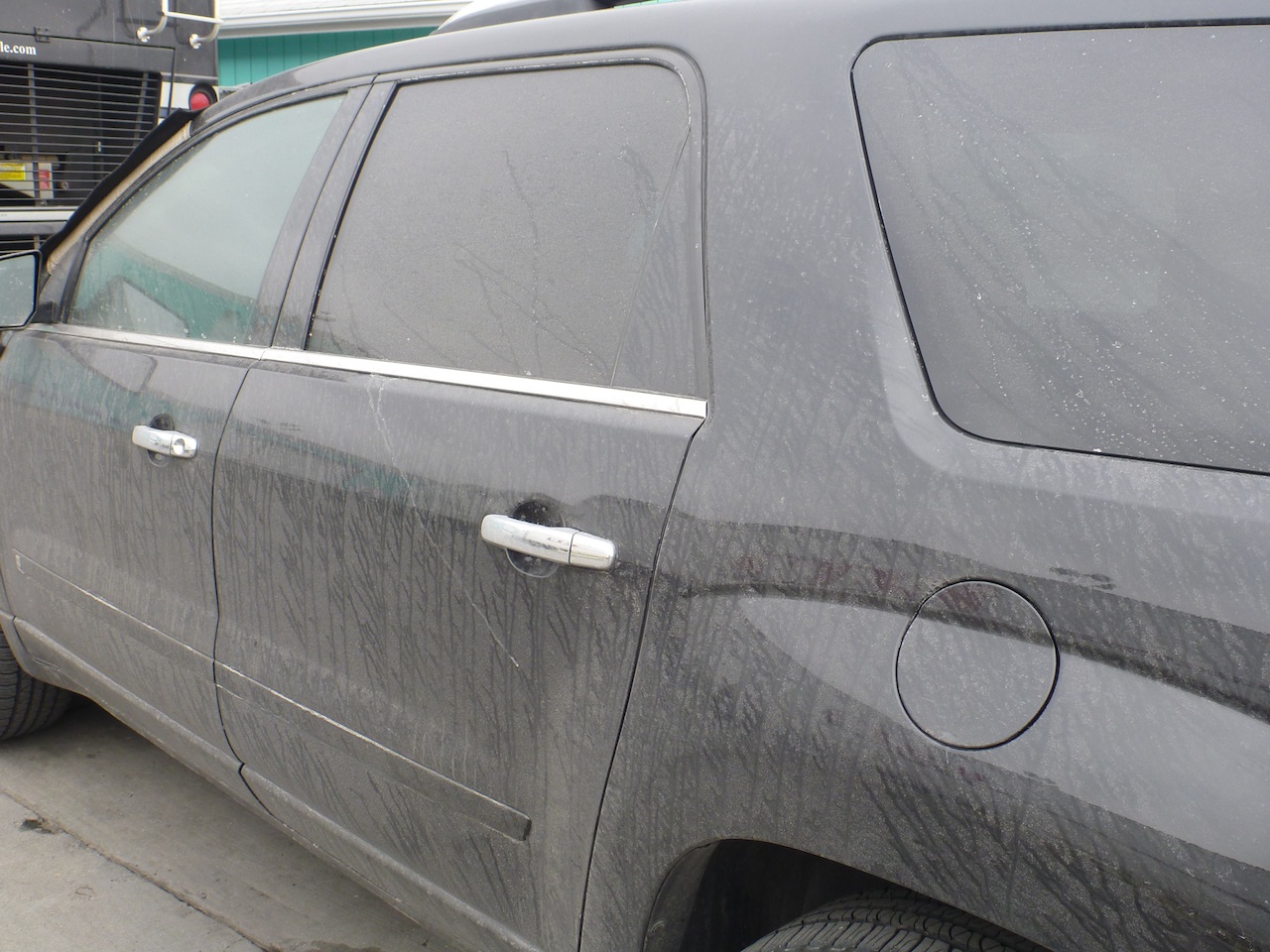 The Car Before Getting Washed.

It did have an interesting pattern on the side of it thought from the roads.  Needless to say there were many trucks in line at the truck wash.  A truck wash typically takes about 15 minutes.  They had both bays open and it took us about 45 minutes or so to get through the line and out the other side. 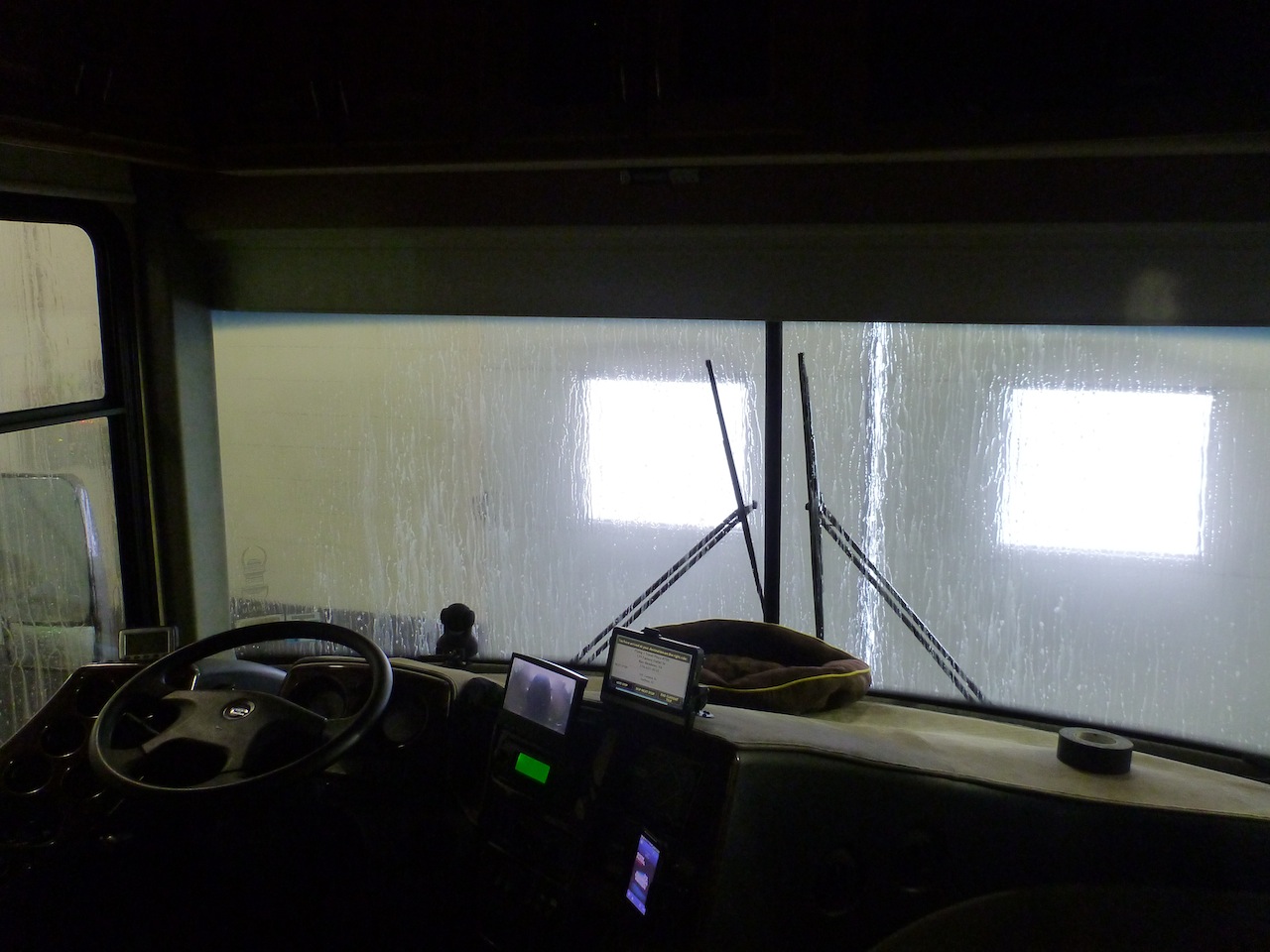 Inside The Truck Wash Getting Nice And Clean.

Well worth it though to get all that road grime and salt off of it.

Of course, doesn’t it figure, not an hour after we got our rig and car washed it started pouring rain.
Or as they call it down here in the south…It was a gully washer!

So we made it to Gaffney, SC safe and sound, just not clean anymore, to the Freightliner Service Center. Just getting some routine maintenance done. Then it’s on to warmer weather. 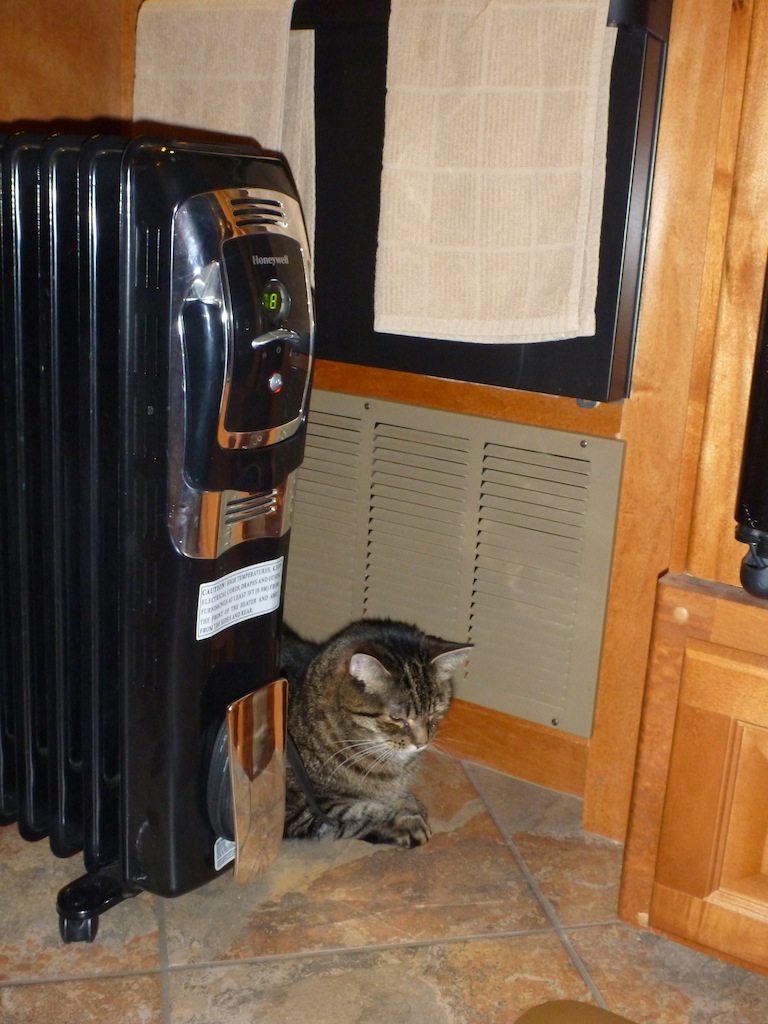 Whisper Sleeping Between The Two Heaters In The Motorhome

Which I think we can all agree Whisper would like.  We found him sleeping next to the heater.  Pathetic.

You all know I love golf cart rides. So mom and da

Just taking a water break on my walk with mom. Not

Time to get back to work supervising dad. My work